Why Choose Plantation Shutters As Your Window Covering

Plantation Shutters are shutters that are fixed to the window opening on the interior and open inwards; allowing easy access to the window and allowing control of light levels within a room.

Plantation shutters also have slats or louvres that are rotated open or closed to have an effect on how much light is let into a room, and at what angle, in order to help prevent glare, when working or watching television and so on, which is an advantage if the room gets a lot of sunlight during the course of a day.

Because plantation shutters are predominantly custom made as such they are constructed with the exact dimensions of the window in mind, meaning the fit is exact, allowing optimal light management. 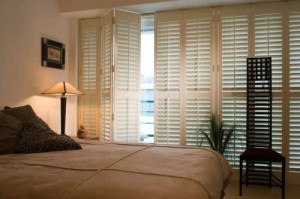 Because plantation shutters are essentially a more solid well fitting barrier to a window as opposed to curtains for example, this leads to better management of heat, meaning that heat is kept in a room and cold is kept out.

This is better for room temperature, but also good for saving energy and more importantly saving on energy bills, meaning that they may be initially a bigger outlay than curtains but plantation shutters will eventually bring about a better return on investment.

Alongside the cost saving on energy bills, plantation shutters add value as they are a desirable feature, and as such overall prove a solid investment when renovating or redecorating a property.

Following on from this, especially in period properties, such as Victorian homes plantation shutters add an element of style that suggest the property is well maintained as well as being fashionable. By covering the interior of a window opening, plantation shutters hide the less than appealing look of uPVC windows which means that it helps to maintain authenticity of the period property.

In terms of health and hygiene, plantation shutters have an advantage over curtains or other fabric window dressings, as they are easy to wipe clean. This means that dust is easily removed, but because they are made of wood the dust isn’t retained by the material either, which means that there is a less opportunity for dust mites to breed which have the potential to cause allergies and itching. Being easy to wipe down means that plantation shutters are also incredibly low maintenance.

Because plantation shutters are made of timber, then they create a much better barrier against external noise pollution, when they are fully closed. This due to them essentially adding an additional layer of glazing.

Related to this, from an external point of view, by being perceived as a solid barrier behind the window, having plantation shutters adds an extra sense of security as a solid layer after a window appears a much less inviting prospect to any potential thieves.