What to Look for in Luxury Towels

How to Find the Most Luxurious Bath Towels For Your Money

Shopping for bathroom linens, whether in-store or online, can be a bit of a minefield. All too often, the word ‘luxury’ reflects the price tag but not the actual quality of the towels. In addition, so much depends on personal preference that it pays to do your research before you buy. This guide explains what to look for in luxury towels so that you know exactly what you’re getting for your money.

What to Consider When Buying Towels

Egyptian cotton towels have a longstanding reputation as the best on the market. However, there are a number of lesser-known alternatives that are not far off in terms of softness and durability. These include American and Turkish cotton, both of which have extra long fibres for a silky feel.

Tip: Don’t be fooled by common marketing ploys. For example, towels are often sold as ‘Egyptian cotton’ when they actually contain as little as 10 percent Egyptian cotton, so read the label carefully before you buy. 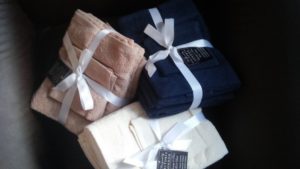 There are four weaves that are commonly used to make luxury bathroom towels:

Tip: If you’re looking for decorative towels, it’s worth paying more for jacquard ones rather than going for  the cheap option of printed designs. These only appear on the face of the towel and tend to make the fabric feel stiff.

The manufacture of luxury towels involves removing small fibres and debris from the yarn to leave only the longest and strongest threads. This makes for a softer and more robust towel. There are two ways of doing this:

Combing is a laborious process, so combed cotton towels tend to be more expensive than carded ones. However, this doesn’t necessarily make them better; it’s more about what feels right for you.

The higher the GSM (grams per square metres), the heavier, denser and, generally speaking, more absorbent the towel is. On the flipside, heavier towels take longer to dry so are more prone to odour retention. Again, it’s all about striking the right balance for you.

Still not sure which kind of towel to choose? Woods Fine Linens has a longstanding passion for luxury linens dating back to 1733, and their experienced staff will be more than willing to help you come to an informed decision.

Call 01423 530111 to discuss your requirements in detail, or visit their shop in Harrogate, North Yorkshire to feel the softness of their luxury towels for yourself.