What is Damask Linen?

Commonly appearing in luxury tablecloths and upholstery, damask linen has long been considered a hallmark of refinement, prized for its intricate detailing, dense weave and lustrous finish. But exactly what is damask linen? Where and when did it originate, and how has its production changed over the ages? 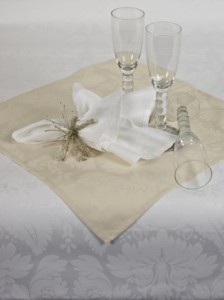 Damask is a reversible figured fabric, which means it is woven in such a way that the pattern on one side is the inverse of the other. Often inspired by nature, the design is traditionally woven in satin onto a weft-faced or sateen weave background. This gives damask linens a spectacularly lucent quality. Damask weaves can also be achieved using wool, linen, cotton and synthetic fibres such as rayon.

Damask is named after Damascus, a major trading hub and textile manufacturer of the Middle Ages. Having originated in China, damask linens were traded along the silk road though Asia and into the Middle East, where they got their name.

By the 14th century, damask linen was being woven in Italy using draw looms, a kind of hand-loom used for weaving figured cloth. It was usually monochromatic, with a glossy, warp-faced satin pattern against a matte background. However, two-colour damasks with contrasting colour warps and wefts were also produced, as were polychrome ones with threads in metallics or other colours.

Up until the Industrial Revolution, damask cloth was a luxury that only aristocracy could afford. The invention of mechanical jacquard looms saw a dramatic reduction in the cost of production, and damask linen became increasingly accessible to the middle classes.

Nowadays, damask cloth continues to be produced mechanically, mostly in single-colour weaves. Damask tablecloths remain a firm favourite in both traditional and contemporary homes, and in spite of their historical roots, they continue to stand the test of time. 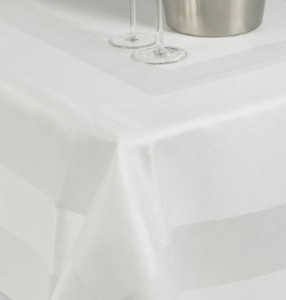 Many contemporary manufacturers take a playful approach to the traditional leaf and flower damask patterns, scaling portions of them up, adding detailing or stripping them right down. The resulting designs are simultaneously natural and graphic, delicate yet powerful. Other contemporary damask patterns are far simpler, with non-organic, fuss-free motifs such as repeated squares, diamonds or bands.

You should by now have a better idea of what damask linen is, where it originated and how it has become the affordable luxury that it is today. The history of the damask pattern is explained in more detail in an informative blog post by artist and designer KT Doyle. If you wish to browse and buy fine damask table linen online, go to www.woodsfinelinens.com.