A 5-Minute Guide to Yukata Kimono

What is a yukata?

First of all, what is a yukata when it’s at home? Put simply, it’s a casual style of Japanese kimono with straight seams and wide sleeves, typically worn after bathing and during the warmer months of the year. If you buy a kimono in the UK, chances are it’ll be a yukata like the ones shown here as opposed to a formal-style kimono such as a furisode, which are more elaborate and expensive, and somewhat laborious to put on. 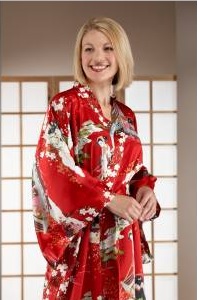 What is a yukata used for?

The word ‘yukata’ is literally translated as ‘bath clothes’, and they were traditionally worn in communal bath houses to cover the body and absorb moisture, rather like a dressing gown. Today, they are often still seen at onsen (hot spring resorts), particularly in ryokan, the traditional Japanese-style inns found therein.

A recent resurgence in the popularity of yukata has seen them being worn increasingly for summer festivals and hanabi (firework displays).

What is a yukata made of?

Traditionally made from unlined indigo-dyed cotton, nowadays fashion yukata are produced in silk and synthetic materials. Young women’s yukata are typically colourful and elaborately decorated, while those for men and older women tend to be more subdued. The yukata worn in ryokan feature white and dark blue patterns and are only intended to be worn within the rooms of the inn.

How is a yukata worn?

Yukata are worn over the undergarments, which may include a juban (cotton undershirt). They are simply wrapped around the body and tied using an obi (sash), with the bow at the back and the left hand side folded over the right. A bow tied at the front traditionally represented a prostitute, while tying right over left is how corpses are dressed at funerals, so it’s important to get this right!

Yukata are typically accompanied with geta (wooden clogs), zori (Japanese sandals) or setta (leather-soled sandals), and may be worn with a haori (short coat) or tanzen (padded haori) during colder weather. Popular accessories include a hand fan, a kinchaku (pouch-like bag), and for men, a hat.

The Japanese Shop supplies a fantastic selection of authentic Japanese yukata for men, women and children in an extensive choice of colours and styles. Browse the range online and order for fast UK delivery, and don’t forget to take advantage of their free Japanese-style gift wrapping service.