A Brief History Of The Roll Top Bath

What Is A Roll Top Bath?

When it comes to your bathroom, the bath that you choose is the centre piece and main focal point of your bathroom’s design Therefore it is important to decide on a bath that suits the style of your bathroom. There are a whole host of bath styles on the market; one of the best options if you are going for a classic look is a roll top bath.

Roll top baths are free standing baths that have curved edges at the top; which give a rounded rolling effect. They come in various sizes to suit a range of bathrooms, alongside this they are often in some great materials such as copper or cast iron. The salvaging and restoration of vintage roll top baths is a popular fashion at present, in order to give the bathroom authenticity.

The Roll Top Bath Throughout History 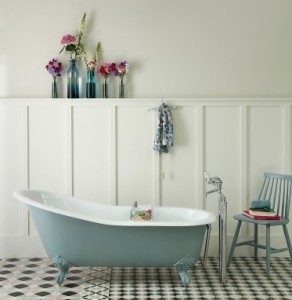 Roll top baths are famous for their traditional appearance, which is due to the fact that they first made an appearance around the 1800’s. However they did not go into mass production until  much later in the 19th century.  However baths have been around much longer than this!

Long before this baths were used for ceremonial and religious purposes. It is thought that ancient plumbing systems discovered in India date back to as early as 3000BC; whereas complex plumbing works in Roman times date back to 500BC.

After the Roman empire came to an end bathing became a  less common occurrence, until around the 11th century. However in terms of bathing being  fashionable and seen as hygienic; this didn’t really become popular until the 1800s when the cast iron roll top bath made an appearance.

The 19th century was the time when it became clear that bathing was a hygienic thing to do, and it became prevalent in schools and other institutions. Public bathing was common in the 1800’s with places such as the Turkish Bath’s in Harrogate being somewhere people went for recovery and well-being. Bathing at home began to catch on however people didn’t have the plumbing of modern times.

Following on from world war one, plumbing in the home began to catch on; with running water being a standard feature; and therefore allowing people to invest in having a bathtub in their home. Roll Top Bath tubs were first adopted by the wealthy and upper classes. These were often free standing and raised, in the centre of a room. Those who were interested in opulence would sometimes have a roll top bath in their master suite for ultimate luxury.

Acrylic baths began to take over from cast iron and copper tubs, as they were more cost effective to mass produce allowing a greater share of the population to invest in them. However as time has moved on ad people have become more wealthy, the roll top bath has had a renaissance and become a popular feature for those who are looking to create a luxury effect in their bathroom!